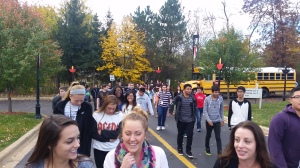 As I write this my 8th period World History class is taking their very extensive and comprehensive final exam.  In most contexts, a final exam of this type would be considered a “summative” assessment, measuring their basic level of understanding of all the major things we covered in here this semester.  And it certainly is that for this class.  Back to that in a bit.

But this test is also “formative.”  Formative in that, as they go into the summer and leave their books and studies far behind, they will still be engaged in the important processes of personal decision-making, personal growth, and money – and life! – management.  I think the gamification I added to their class this semester helped further this process, thus making the gamification aspect of the final  “formative”.  The students had many choices to make for the final exam, which they had to pay for (see my previous blogs in which I explain the class money system). Here are some of the choices: 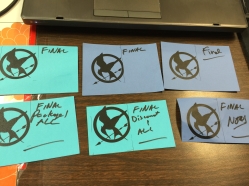 I am sure some of the choices here will startle, anger, or at least awaken some educators.  For the record, I have never let students use notes on a final exam before.  But I knew that some students had extra money from their good work and entrepreneurial habits in the class, and I wanted to find ways for them to be able to “spend” it before the year ended.  So I started to think of things that students might want to use their extra P-Daddy bucks for, to put in sort of a class “store.” (In doing this money gamification, I began realizing the problems that a central bank has in balancing a money supply, to avoid inflation, deflation and stagflation!) And so I got together some lanyards, home-made bracelets and even some gift cards to Starbucks, Subway, Chipotle and Dunkin Donuts.  But then I also thought that for students who cared about their grade, the ability to use notes on a final would be something they might want to buy also. Since our district will be changing the World History curriculum for next year, making it more theme-based, and compatible with SBG (standards based grading) I am pretty sure this is the last time this exam will ever be given.

Now about the matter of buying the option of allowing  their final exam grade be their grade for the semester.   For 10 years I have offered this to my World History students, going back to the days before I flipped the class:  If you get an A on the final, I will give you an A in the course.  I offered this because when I was a senior in high school, my Algebra II teacher, Mr. Turban, called my mom and said I was really slacking and not working up to my ability.  So I went on a two day attacking of the course before the final exam, and got an A on Mr. Turban’s final exam.  But statistically that A was not enough to get me an A in the course.  But Mr. Turban took notice, and gave me an A in the course!  I have never forgotten that.  This fits the current grading philosophy in my district.  Maybe the kid didn’t understand things early in the year… he was not motivated, he was sick, he was inattentive, whatever.  But now, at the end of the course, he is getting the things he should have grasped all along.  Why punish a late bloomer?  Because this is a 150 question comprehensive final, it truly is a pretty good measure of how much a student has mastered the material in the course.  In those 10 years of making this offer, however, it should be noted, I can only remember one student getting an A who did not already have an A.  So, again, if a student is able to get an A on this test, since that is pretty hard to do (even many students with an “A” in the course get a B or even a C on this final), it seems fair, and right to me, to reward them with a grade indicating that they have mastered the material.

It was simply an extension of this idea to extend it to grades other than just the “A”. In other words, if a student has a D in the course, and gets a C on the final, I was standing ready to give them the C in the course…  So if a student paid for this option, if they had a D in the course, but got a B on the final, they could get a B in the course!  But if they did not pay for this option, the best that B on the final would get them was probably a C.  Even with what seemed like something that every student would want to buy, only a relative few initially chose to buy it.  I mentioned the option every day for the last few weeks of class, as we reviewed and prepared for the final.  More students began to buy it, as they saw its value, but still less than half the students chose the option.

In my third period World History class, which took this same final yesterday, there was one student who got an A on the final that did not already have an A in the course, and I was glad to record his grade as an A.  There were 3 “C” students who got Bs for the course, and several students who got Cs, who had a grade of D to that point. These 3rd period students averaged 77% on the final exam, up from my usual World History averages from previous years in the upper 60% range. I think this method is fair, as a way to ascertain a summative grade for the students, and also think it provides a “grit” framework that adds a formative element toward future life success and personal character formation.

Another option for spending extra P-Daddy Bucks was to earn a ticket for 3 people to come to a Pizza Party I put together for about a week after school was out.    With all these various options, all students are going into the summer “even” in the class money system. All quality work was rewarded with real things, either grades and/or goods.

And I am going into the summer with a good feeling about this gamification element, about teaching World History through flipping, and about helping students make decisions that are formative in helping them grow up! School’s out! (never really….) 🙂